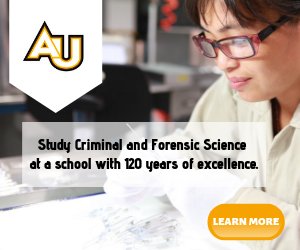 In recent years, forensic science has attracted attention both on the small screen and in the real world. While hit shows like CSI and Bones garner record ratings, so too have forensic science graduates. That’s because television has only begun to scratch the surface of a rich, complex field with a number of career possibilities – careers which, according to the United States Bureau of Labor Statistics, are expected to have above average growth in the coming decades. So with that in mind, in this article, we will try to address some fundamental questions about studying forensic science, starting with:

What is Forensic Science?

Forensic science is the combination of two different Latin words: forensis and science. The former, forensic, relates to a discussion or examination performed in public. Because trials in the ancient world were typically held in public, it carries a strong judicial connotation. The second, of course, is science, which is derived from the Greek for knowledge and is today closely tied to the scientific method, a systematic way of acquiring knowledge. Taken together, then, forensic science can be seen as the use of the scientific methods and processes in crime solving.

Despite its ancient etymology, forensic science is anything but old-fashioned. Branches of forensic science are rooted in almost every branch of science and many other aspects of modern society. Because of its ability to find and present objective evidence from areas as diverse as chemistry and accounting, today it is recognized as an essential part of the judicial system.

Because when it comes to cases of life and death, objective evidence is crucial. While key evidence in criminal cases may have come from witnesses or other subjective means in the past, forensic science allows for objective evidence. That means that forensic evidence, based as it is on the scientific method, is seen as more reliable than even eyewitness testimony. In a judicial system which maintains that the accused is innocent until proven guilty, evidence gathered by forensic scientists is now regularly used by both the defense and the prosecution in many court cases.

While CSI may have gathered a lot of attention in recent years, if autopsies are not your thing, don’t worry: there are a number of subspecialties in forensic science. Some of the most prominent are:

To learn more about these and other career possibilities, be sure to check out our article on careers in criminal justice and forensic science. »

Because of this diversity of subspecialties available within the field, forensic scientists can be involved in solving a crime at almost any stage in the criminal justice process. While Forensic Toxicologists, for example, might work most closely with law enforcement or the courts after a crime has been committed, Forensic Psychologists (commonly known as Profilers) can come into play even before a suspect has been identified in order to help prevent future crimes.

If you are interested in finding out more about the exciting possibilities that forensic science has to offer, contact the John Jay College of Criminal Justice. They offer Bachelor, Master/JD, and certificate programs in a number of fields within Forensics including Forensic Science, Forensic Psychology, Forensic Law, Forensic Mental Health Counseling, and Digital Forensic and Cybersecurity programs.

Learn more about studying criminal and forensic science in the USA by reading our growing article collection.

« Study Guide by Subject   « Study Criminal and Forensic Science in the U.S.

Over time we will be updating this section and including more information for those who want to study criminal and forensic science in the USA and for other countries, but please feel free to post your thoughts and comments on our Facebook fan page, and also follow us and post questions through Twitter.

Study Criminal and Forensic Science in the US

Study Criminal and Forensic Science in the USA Guide

Visit the Study in the USA School search to find schools that offer programs of study in Criminal and Forensic Science.

College of Central Florida Offers over 150 academic pathways for undergraduate studies, including 4-year bachelor’s… https://t.co/7eXQODUEHA
Northwest Missouri State is a public university that offers 160+ majors and programs at an affordable cost. Northwe… https://t.co/NHoOWaqDoE
The College of Extended and International Studies at CSU has the job of internationalizing the campus by promoting… https://t.co/DtMyS0ssfe
The newly-built University Recreation Center just opened its doors in 2020 and features indoor and outdoor swimming… https://t.co/JgO9BRdhhZ