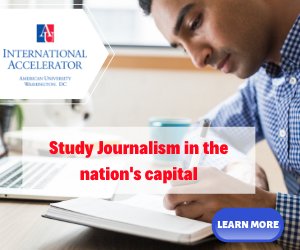 An undergraduate degree in journalism encompasses a wide variety of skills. In general, journalism students are expected to have a broad base of knowledge (meaning, familiarity with many different subjects) and be able to communicate effectively, all while learning basic journalistic skills. Each school has its own way of preparing journalism majors for the working world, but every student can expect a variation of the following over the course of their studies.

International students choosing to study journalism will, upon graduation, receive a Bachelor's Degree. The course of study takes four years (depending on the number of credits taken per semester and students pursuing a minor or double-major).

An undergraduate degree in journalism involves a great deal of seemingly unrelated classes. At certain j-schools, students may spend up to 70% of their time in classes outside the journalism major. While it may seem counterintuitive, it's no mistake.

Journalists need to be aware of current events, historical events, and literary references. They need to understand the psychology behind people's actions and the science behind technological innovations. Journalists must have a base understanding of any given subject in order to recognize it's significance, reflect on it's meaning, and report it to the public. For aspiring journalists this means studying politics, history, literature, psychology, and science, among an ever-expanding list of courses, to gain an awareness of the world and the issues affecting millions of people everyday.

This isn't to say that journalism-specific classes aren't important. They might be fewer, but they are the fundamental learning blocks of an undergraduate degree in journalism. Lower-level journalism classes teach writing, reporting, and editing across all types of media (print, broadcast, or the Internet). Upper-level journalism classes will continue to hone those skills, but also venture into ethics, media law, journalism history, and specialized classes based on the student's interest area.

As mentioned above, an undergraduate degree in journalism takes four years. The first two years, being a student's freshman and sophomore years, and the last two are junior and senior years, respectively. International students interested in a journalism major can expect four to five classes a semester doled out accordingly:

Freshman Year
Students entering university, regardless of major, will start out with the university's general electives. These are a core set of classes required of every student in order to graduate. General electives usually include writing, foreign language, math, science, history, and additional classes that the student chooses from a list of approved courses. Electives can be waived if a student has received college credit for classes taken in high school or if a student can test out of it. For example, international students whose first language is not English can test out of the foreign language requirement where applicable by each university.
Introductory journalism classes teaching basic journalism skills are also taken in the first year.
Sophomore Year
Second year students' schedules may include the remainder of any lower-level journalism classes and general core electives. Journalism students may be asked to decide what specialty, or interest area, they would like to pursue. Specialties may include sports journalism, magazine writing, or business journalism, among a long list of other options. Class schedules for junior and senior years will be based on this decision.
Junior & Senior Year
Students are now considered "upperclassmen." This means taking upper-level journalism courses, especially those that are specific to a student's interest area. Students may also consider taking a semester to participate in an IELTS for school credit. Lastly, most universities require seniors to complete a capstone journalism class: the objective being to reflect on the previous four years of study and complete a semester-long research project or report.
Other Things to Consider
International students pursuing a minor or double major will have to allocate space in their schedules accordingly. Students may be forced to take classes over the summer, take more than the average four to five classes per semester, or graduate in more than four years.

In addition to coursework, students enrolled in an undergraduate degree in journalism, can get involved in many on-campus extracurricular activities. These are great ways to meet other students in the same major, and to gain experience. Campus newspapers, magazines, broadcast and radio stations, or student groups are available in some form at every j-school.