People and Culture of Australia 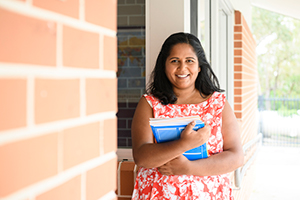 Although Australia is a predominantly Christian country with about 52% of all Australians identifying as Christian, there is no official state religion. People in Australia are free to practice any religion they choose, as long as they are not breaking the law. Religions from all over the world are practiced in Australia, demonstrating its cultural diversity. Most universities and communities in Australia have facilities and places of worship for all types of faith, so international students in Australia should contact their international student officer about facilities at their educational institution.

Australia has no official language, but the majority of the population speaks English as a first language. According to the 2016 census, 73% of people in Australia spoke only English at home, even including a large number of first- and second-generation migrants. Australian English has a distinctive accent and vocabulary. Because people from about 200 countries around the world have migrated to Australia, there is a vast collection of languages spoken in the country. Other languages spoken in Australia include Mandarin, Italian, Arabic, Cantonese, and Greek. It is believed that at one time, there were almost 400 Australian Aboriginal languages, but now only 70 of these languages have survived, and all but 30 are endangered. One indigenous language is still the main language for about 50,000 Aboriginal people in Australia.

Indigenous Australians, or Aboriginals, are the original inhabitants of Australia. They migrated from Africa to Asia around 70,000 years ago, and from Asia to Australia 40,000 to 50,000 years ago. When the British arrived and began to settle in Australia, they brought with them diseases such as measles, smallpox, and tuberculosis, causing massive amounts of damage to the Aboriginal population. The British also appropriated land and water resources in Australia, and converted rural lands for sheep and cattle grazing.

Nowadays, there is a great amount of diversity between different Indigenous communities and societies in Australia. Each has its own customs, cultures, and languages. The Indigenous Australian population is mostly urbanized, but as of 2017, 22% live in remote settlements. These settlements are often located on the site of former church missions.

Australian art dates back to prehistoric times. It includes Aboriginal, Colonial, Landscape, Atelier, early twentieth century painters, printmakers, photographers, sculptors, and contemporary art. Art in Australia has a long history. There is evidence of Aboriginal art that dates back at least 30,000 years. Examples of Aboriginal rock artwork can be found throughout the continent. Australia has produced many notable artists of both Western and Indigenous Australian schools throughout the course of its long and impressive history.