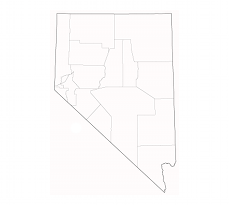 International students who study in Nevada will have their academic experiences coupled with the beautiful mountain scenery and desert-basin surroundings of the "The Silver State". Not to mention, they will be but a stones throw away from the many man-made and natural attractions of the world-famous city of Las Vegas, as well as those found in the neighboring states of California and Colorado.

With more than 85% of the land owned by the federal government, 66% of the state's population (2.7 million people) live in the Las Vegas Metropolitan Area. That being said, there are more than 591,000 people living within Las Vegas itself, and this is only expected to increase. Nevada is the 8th fastest growing state, in terms of population growth. This population, especially within Las Vegas, is especially culturally diverse, as evident by its world-renowned Las Vegas entertainment.

Whether it's the casinos, the extravagant architecture, or the world-class performances and shows (many of which can be attended for free) for which the city is famously a host, international students in Nevada can relax in their spare time with the abundant recreational activities that drive the state's economy. Those international students who choose to study in Nevada and who would prefer outdoor activities and recreation should check out one of the twenty-five state parks throughout the area. Situated in various settings, these parks are embedded within rich ecosystems native to mountains, deserts, gorges, valleys, basins, and lakes. Some even contain ghost towns (relics from Nevada's early history of mining) and fossilized dinosaur remains. Some favorite outdoor activities in the region include boating, swimming, water-skiing at Lakes Mead and Tahoe, or skiing and snowboarding during the winter. As you can see, there are many different types of activities, both indoors and outdoors, for any international student to enjoy.

In terms of the economy, Nevada's median income is more than $56,000, making it the 15th highest in the United States. International students in Nevada can expect to pay an average of more than $14,000 in tuition in order to join the ranks of the 98,000 Nevada students seeking degrees from institutes of higher education. Many of the local employers rely heavily on these institutions to sustain their workforces.

The state's per capita income is more than $38,000 (ranking at 19th in the nation), and the state's entertainment/gaming, tourism, and mining-based economy has a tax structure famous for lacking a personal and corporate income tax. Despite the favorability of the tax structure toward corporations and the on-paper wealth of the state, Nevada has the nation's highest unemployment level (currently at 14.4%). Perhaps, the bleak status of Nevada's economy contributes to the state's also having the highest crime rate in the nation (more than 25% the national average)—causing the state to be ranked as the most dangerous state in the country for the past five years in a row. However, noteworthy for international students studying in Nevada is the extremely concentrated nature of the population in the Las Vegas Metropolitan Area that disproportionately (negatively) skews the overall crime figures for the state, and most incidents involve visitors rather than residents. So, aside from the potential dangers of the Las Vegas strip, international students in Nevada can rest assured they reside in one of the most beautiful and rural states in the country during their study abroad experience.

For more information and to search schools to study in Nevada, and to contact them for free for further information, please visit the Study in the USA School Search.