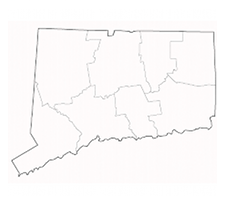 Located in the northeastern coastal region of the United States, the state of Connecticut is known for the prosperity of its citizens, which has been attributed to the state's stronghold in the manufacturing industry, as well as early success in the development of financial and insurance business organizations. As a result, many Connecticut residents enjoy high quality of living standards, which is reflected in the state's impressive Human Development Index (HDI) ranking (.962).

What is more, this wealth translates into incredibly well-developed and maintained city-scapes, recreational parks, and transportation systems throughout the state. For international students studying in Connecticut, open access to such well-developed cities and rural infrastructure is certainly a bonus not as readily available elsewhere in the country.

Connecticut is sandwiched between the states of Massachusetts and Rhode Island (to the north and east) and shares a border with New York State to its west. Connecticut's human continental and subtropical climate range and geographic location provides the perfect climate to sustain a diverse range of beautiful forests, both on the coast and throughout mountainous ranges. Once again, due in part to the economic wealth that exists throughout this state, international students studying in Connecticut can (and very often do!) take advantage of open access to beautiful scenic trails through forests, rivers, waterfalls, coastline, and lakes that have all been purposefully designed and developed for human exploration and recreational activities.

If you need additional funding to study in Connecticut, explore financial resource options like scholarships and loans.

Depending on your interest, there are many schools with top notch academics and degree specializations. Sacred Heart University , located in Fairfield, is ranked as having one of the Best Business Schools by U.S. News where one-third of their recent undergraduate class graduated with a degree in business. Alternatively, if you are looking to study engineering as an undergraduate, Trinity College would be a good option as they are ranked as having one of the Best Undergraduate Engineering Program in the US (according to U.S. News).

International students who are interested to study in Connecticut have many incredible options when it comes to quality education, and are often told the same things international students studying in the northeastern region of the United States are assured; have confidence that the quality of higher education in this region of the country is superior to any other and, in many ways, sets the national standard for higher education in the United States.

For more information and to search schools to study in Connecticut, and to contact them for free for further information, please visit the Study in the USA School Search.