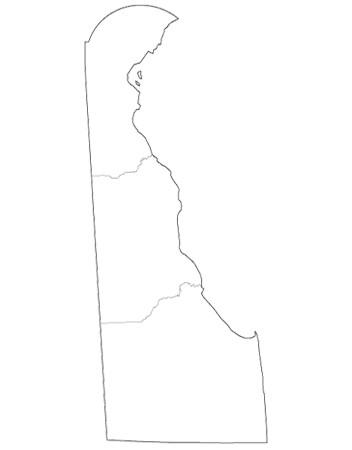 Delaware can be found in the northeast of the United States where it primarily borders Maryland to the west and south. Toward the northern tip, Delaware shares a border with New Jersey and Pennsylvania making traveling easy and accessible. While Delaware borders three states, it is the second smallest state by area in the US right after Rhode Island. If you are envisioning rolling hills and spread out infrastructure, don’t be fooled. Even with a small population of 897,934 (as of 2010), Delaware ranks number 6 in the nation in terms of its density.

Within this density, however, international students will find a wealth of culture and diversity. While the majority of residents are white, Delaware has a large Hispanic, Asian and African American population. Within Delaware, there is also a large immigrant population. In fact, 7.8 percent of the population is foreign-born creating a more multicultural environment. While English is by far the most commonly spoken language, you can also find other languages including Spanish, French, Chinese, and German.

International students will also gain exposure to some of Delaware’s primary industries including agriculture, manufacturing, mining and the financial services. Some of the main companies in Delaware include The DuPont Company, J.P. Morgan and Chase Company, Citygroup INC, and General Motors Corporation. If you are interested in one of these areas, international students will find a great opportunity to build their experiences – and resume – doing an internship over the summer, after graduation, or perhaps alongside their class schedule.

Internship opportunities are a great way to build on the experiences you learned in the classroom, especially as you continue to develop the skills with dedicated professors that are invested in your future. The most well known school in Delaware is the University of Delaware located in Newark – a short train ride from New Jersey and New York. Founded in 1743, the University of Delaware is ranked #8 as an Up-and-Coming School by US News and World Report. What does this mean? This award is given to the school with the most promising and innovative changes in the area of academics, faculty, and student life. Beyond the rankings, the University offers over 137 different majors for their 20,700 undergraduate and graduate students.

If you need additional funding to study in Delaware, explore financial resource options like scholarships and loans.

If you are looking for a smaller suburban setting, Wilmington University might just be the perfect fit for an international students who want to study in Delaware. Wilmington University is a private school located in New Castle, which can be found right outside of Wilmington. With a smaller student body of 13,000, Wilmington University places an emphasis on individualized attention fostering an environment of learning and guidance. While the majority of students are female (63.5%), the university has a large number of majors for undergraduate and graduate students.

With all there is to do in the classroom, on campus, and in Delaware itself (and if students are feeling adventurous, in the neighboring states), international students may be calling this home within a few short months after arrival. Delaware has a unique environment filled with a diverse culture and an opportunity to for international students to make the most of their experiences in America!

For more information and to search schools to study in Delaware, and to contact them for free for further information, please visit the Study in the USA School Search.