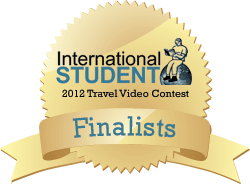 With over 100 entries from 44 different countries, we had the largest, most diverse and highest-quality pool of videos ever, by far. The competition to get to the Finalist round was fierce, and with only 16 Finalists less than one in six could make it through. If we had our way, we would do something for everyone who entered. We would send Amber to Daytona Beach, watch Alejandra dance in the moonlight, help Anais-Marie to spread her wings, pack Eli and Savanna off to Japan, and follow Nancy to the end of the world. We would make a huge contribution to D.K.A.F. and help to connect Elena to her past. We would see how Lorna’s text tale ends, broaden Aliev’s horizons, and play matchmaker for Alberto and Salamanca. We won’t forget William’s pictures of Hurricane Sandy, Angela’s superheroes or Svetlana’s traveling lifestyle. We enjoyed each video and appreciate the effort and creativity behind it.

Out of this incredible group, the Finalists emerged. You can watch all of them below. Make sure to check out Redefining Home, the winner of the Viewers’ Choice Award. Cat Tuong Le garnered almost 20,000 votes in just a few days with her emotional but composed desire to return to Vietnam to see her Dad.

Congratulations to the 2012 winning entries!

To keep up to date with all the current events at InternationalStudent.com, sign up for the newsletter today.

Alberto, a Spaniard studying in Mexico, has a meaningful project to pursue so isn't ready to go home. His film, part homage to old westerns and part montage of images of sadness, makes us laugh.

Cat has been away from home and her terminally ill father for the past two years while fulfilling her vision to study in America. She is now revealing her new dream and why she has had a change of heart.

Meg shares her childhood aspirations - librarian, archaeologist, ballerina - and shows us why she abandoned each of them. Except one - this aspiring thespian shows her craft while she tells her story.

An Interview With the Winner and Loser

We see the two sides of SooBin Kim, the one who handles success graciously (sort of), and the one that handles defeat with dignity (not at all)! And we hope he gets a girlfriend . . .

Watch Pernille’s life unfold! Her drawings will captivate you as they tell the story of her past and what happened once she decided to exit her comfort zone.

Is Sherif the planet’s saving grace? Take a ride with him as he shares his ideas on conventional energy, going green and how he plans on changing the world.

Trouble finds Do Pham when a sharp shooter visits his town in the Wild West. A duel leaves Pham empty handed and threatens his dream of studying in San Francisco.

Ali is an aspiring filmmaker and musician from Turkey, looking to become a well-rounded artist by experiencing cultures other than his own. His rap tells all as it reveals why he is ready to leave his home country for the first time ever.

Tiffany left singing behind but after tragedy, wants to get back to it. Studying opera in Florence will reconnect her with her heart of hearts.

I Know I Can

Only one trip can hold Elene's undivided attention - back to her war-ravaged home in Georgia.

Follow Myrtle as she travels between two parallel realities, the life she lives and the life she aspires to have. She is ready for the unknown and to be excited by a journey that she has yet to take.

Natasha is a documentary film maker with a zest for life, cultural nuances and tales that have yet to be told. Find out why she has the desire to study in Spain and bring back stories of both the good and the bad!

Yana wastes no time in telling this tight tale about her desire to study Spanish in Spain. You will love the simple animations from this Russian illustrator.

Watch Toler's transformation from bearded hallucinagenic to stereotypical Frenchman. His obsession haunts his friends more than it does him, so they need him to go.

Zach, a confident student, thinks he is prepared to study abroad in the United States and can handle the cultural differences. However, he quickly realizes that he still has a lot to learn. Tough situations arise and he is forced to battle the unknown in a foreign land.

Professor Hans von Puppet has known Seth for years, and tells us why he would be a great fit for a study abroad program in London. And how a little bribery may have prompted his recommendation.

Can't find the video you're looking for? Check the full list of 2012 videos.

All efforts are made to ensure that votes are authentic. Any videos with fraudulent votes will be automatically disqualified from the contest.